Gary and Donna are a retired couple still living in their Portage, MI home that they raised their family in. Gary shares fond memories of walking his children to the school down the street every day. He grins, “I was a lucky Dad.” Once they became empty-nesters, Donna set in to give the home a bit of a facelift. Gary says he was just along for the ride.

One of their bigger projects was to remove the existing back porch that was falling off the house.

Their goal was to replace it with a 3 season porch that they could “actually use.” It was too big of a project to take on by themselves and knew they would need professional help. Gary and Donna had some friends refer BlackBerry Systems to them for their home improvement projects. But sealing the deal was when they saw the outcome of their neighbor’s replacement vinyl siding done by BlackBerry. After a consultation with a specialist from the design team, their 3 season sunroom evolved into a 4 season Oasis sunroom that they would be able to enjoy all year round.

Gary expressed how typically communication with contractors can be challenging, but not with BlackBerry’s contractors. The roof of the old porch had settled into the house and Gary was concerned it would be an issue when removing it. He said all eyes were on the project and the contractors made the transformation happen.

“They were so good to work with and the craftsmanship is excellent. I was very impressed!”

When asking the couple what their favorite part of this home improvement project was, they both said the high cathedral ceiling and all the double-hung windows that allow great airflow when the weather is nice. Gary shared that really for him, his favorite part, is the healing benefit his wife receives from all the sunlight that can come through the windows in the winter. 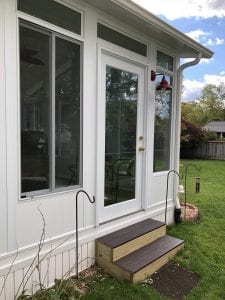 With a smile, they both share how they sit out in the sunroom with a cup of morning coffee to watch the sunrise and enjoy the evenings gazing at the stars.

If sunrises and stargazing through large open windows sounds like something you dream of, then you need to contact BlackBerry Systems to set your dream into a plan. A member of the design team will come to you and give a thorough evaluation of your home improvement project.

Click here to check out our Sunroom Inspiration Gallery

A Complete Exterior Makeover on a Lakefront Home
September 15, 2020