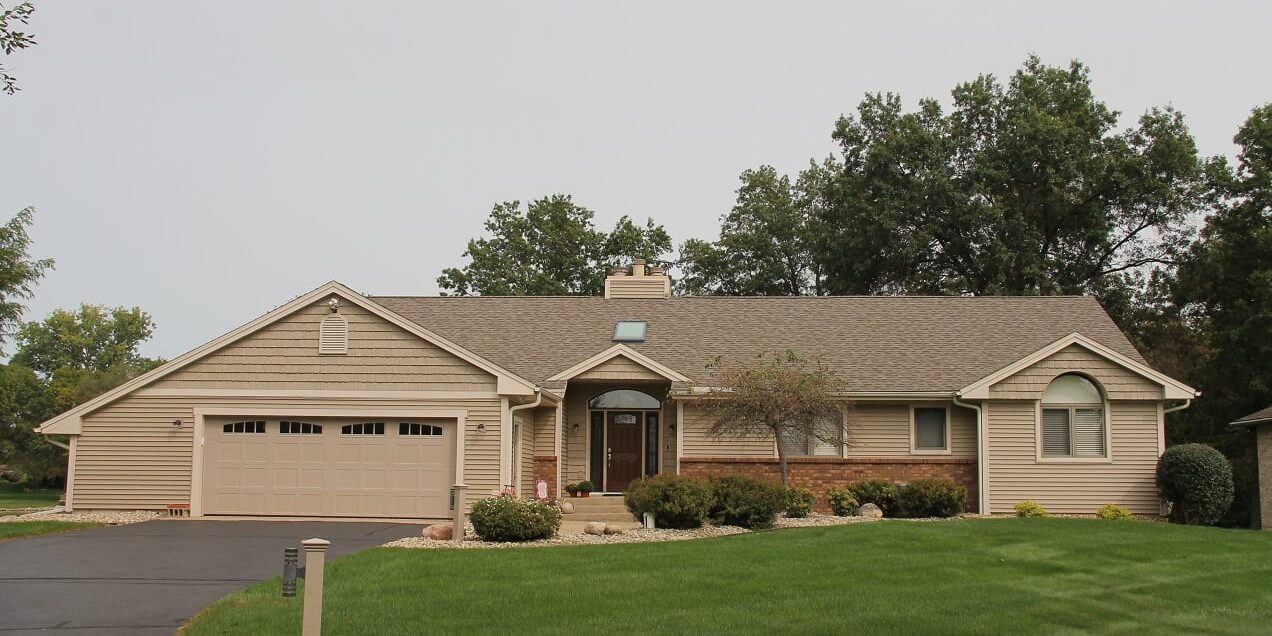 A Complete Exterior Makeover on a West Michigan Lakefront Home

The Tindall’s West Michigan home in Portage received a complete exterior makeover this summer. The owners, Scott and Shelley Tindall built the house 32 years ago and initially wanted to replace the exterior home siding and outside decks. But as the project started they soon discovered some hidden water damage that would surface as a bigger problem if not taken care of now.

The home was originally all cedar siding and as Shelley put it,

“Frankly, we were just tired of looking at it. Plus it was really looking old. It was due time.”

Scott went on to share that once BlackBerry started to remove the siding and soffit at the front of the house, it was discovered there was water damage under them. This led to an evaluation of the roof which revealed that it too had run its life span and needed to be replaced. As home improvement projects can go, the Tindall’s ran into another snag while having the roof inspected. The inspection revealed that one of their 5 skylights was leaking and would need to be addressed if they were to do a replacement roof.

Scott told BlackBerry System’s Sales Team Member that if one is leaking then eventually the others will leak, so we might as well be proactive and replace the others as well. He said there were a lot of turns in their original plan and the BlackBerry team rolled with all of them!

The end result was a beautiful neutral color on their home with a cedar shake accent at the top peak areas and an accent color around the windows that they never had before.

“Our windows never had that before and really makes them pop!” Shelley shared.

Of course, the color of the replacement roof was taken into consideration to complement this new exterior look.

Runner up to this new look was the replacement of the old decks. The Tindall’s decided to go with the low maintenance composite material for their rebuild. Scott was surprised by the color selection that is now available. To keep up with their home’s makeover they chose to do a two-tone composite all the way around the decks, with the black railing to make them stand out from the house.

When asking Scott and Shelley what made them decide to keep their home knowing there was going to be a lot of work needing to be done. Scott replied, “It has good bones! We love the floor plan and it’s on the lake. We didn’t want to go anywhere else – we LOVE this house.” Shelley confirmed the same feeling by sharing there’s also sentimental value because her dad took the time to help them build it and he’s no longer with them. “We love having people over to enjoy the lake. We still LOVE our home!”

“We would and have recommended BlackBerry Systems to our friends and family!”

Now with the birth of their first grandchild, Scott and Shelley are looking forward to having little children running around their home again. To start sharing their updated home with the next generation of Tindall’s!

Remember to plan your replacement windows, home decking, and vinyl siding project now to give your home a facelift it will love!

BlackBerry has been improving homes in Kalamazoo, Grand Rapids and beyond since 1980.

Our West Michigan service area (which includes Battle Creek and St. Joseph), stretches from Lake Michigan to Albion, and from north of Grand Rapids to the Indiana line. Call 800.732.9400 today to start planning your home improvement project.

A Vinyl Siding Upgrade That Outsmarted The Woodpecker!
July 23, 2021